About Care for Cows Vrindavan

The history of Care for Cows in Vrindavan begins around 1999 when Kurma Rupa prabhu moved to a house in Madhuvana Colony. One particular cow that was called Tilak used to beg from door to door in the neighbourhood and Kurma Rupa would also give her whatever vegetable cuttings or old chapatis he had. It became a habit for Tilak to go to the house and get something to eat.

When the month of Kartika arrived, Kurma Rupa made a vow to daily feed fresh grass to Tilak and other stray cows in the neighbourhood. He purchased 40 kg of fresh grass daily, and every evening, Tilak, her calf, and some abandoned cows in the neighbourhood would come to eat outside the house. One morning, Kurma Rupa discovered the six stray cows he had fed the previous evening sleeping outside the gate and understood they had camped out there. Very soon about 9–11 cows were coming daily and appointed Kurma Rupa as their protector.

On the last evening of Kartika, Kurma Rupa offered the herd of 11 the regular grass but added some wheat flour to celebrate the completion of his vow. The next morning they were still camped out at the door and demanded that they continued to be fed. Kurma Rupa realised they had no other place to go so he decided to keep it up. For one year, he fed them on his doorstep and had about 11 cows coming every day. Soon the neighbours started bringing their cuttings and putting them on his doorstep to assist in the effort.

At some point, one neighbour who had a vacant plot nearby offered to let Kurma Rupa use it so the cows could be better cared for. Kurma built a feeder and shed and started keeping the cows there. That went on for a couple of years. 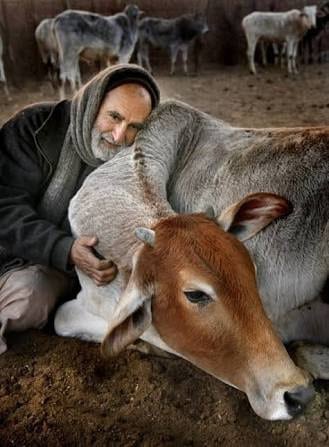 Then Kurma Rupa prabhu was allowed to use some land nearby, in Sunrakh road. By that time Kurma Rupa had 15 cows, and he planned to build a shed for 25. By the time the cowshed was complete, he had 25 cows. Other people showed interest, offered donations and assistance, and the project grew. Care for Cows was born. In 2010, after having to vacate the Sunrakh road land, Food for Life Vrindavan kindly offered a part of their compound in Kiki Nagla for hosting the cows. Care for Cows Vrindavan has been there ever since.

In contrast to a Goshalla (Dairy), Care for Cows operates a Go-sadan, which means a retirement home for cows. We are a registered charitable Trust in India and Holland and are presently providing for a herd of about 250 in Kiki Nagla. We are international volunteers who offer our talents and resources to tend to the neglected cows living in Krishna's holy land Vrindavan. We provide stray cows hay, flour, fresh grass, medical attention and a place where they can recuperate from injuries.

Kurma Rupa left this material world in June 2015, but we are trying our very best to continue his legacy….